‘Writer baton’ is a project whereby photo-writers from each of the 7 prefectures that surround the Seto Inland Sea send each other their particular prefecture’s specialties.
Maki Ohashi from Ehime prefecture sent a parcel to the Fujimoto household in Yamaguchi prefecture. In the attached letter she wrote, “I couldn’t decide at first, but I think this is it after all”. That’s right, when talking about Ehime, mandarins are definitely a hot topic! To think that Ohashi-san went straight to the point, she must be feeling quite confident…

Without pondering the point too long, my mandarin loving wife hastily broke the seal. What lay inside was 3 different types of mandarins: Dekopon, and most likely the hybrid varieties Kiyomi and Harumi. And finally a jam named Kashi 28-Go (a name that reminds me of a robot in a Japanese comic called Tetsujin 28-go).

After shooting a few photos in the back garden, we dug in~!
We peeled the skin to reveal the juicy fruit – they were perfectly ripe, just right for eating.

I stuffed a piece in my mouth and… oh dear, it was “So sweet!”
We can eat the Dekopon without peeling the thin inner skin, right? It’s so “Juicy!!”

If we continued like this, they’d be finished in no time (←by my wife), so I suggested making them into daifuku (rice cakes stuffed with sweet bean paste). In Hiroshima they have Hassaku oranges and daifuku, right? Let’s try that!”

So anyway, as it seemed the most appropriate for daifuku, we chose the slightly sharp Harumi.
As it was our first attempt, I wondered if we could do it right!

They were actually quite easy to make – we finished in no time!
As it seemed that they’d probably be better when cool, we put them in the refrigerator for the night.

The next morning I woke up, opened the fridge door and there were the daifuku right in front of my eyes. Before I knew it, I’d taken a bite.
“Th-this is delicious!”
The sun had just risen, and I was moved all alone in the dim kitchen.

We enjoyed the jam with bread and yoghurt – it’s smooth and fruity, a delicacy.
Kashi 28-go is the official name for Ehime’s original Madonna mandarin variety. Apparently its characteristics include the fruit flesh being a nearly jellylike texture.

All out of mandarins, and satisfied♪  Thank you for the treat, Ms. Ohashi!
Next up is Mr. Matsuoka from Hyogo prefecture. Well then, what should we send him?? Akashi’s “fish paradise!” If you like fish, then this is the best place to visit. /Uontana Shopping Street (Akashi-shi, Hyogo) 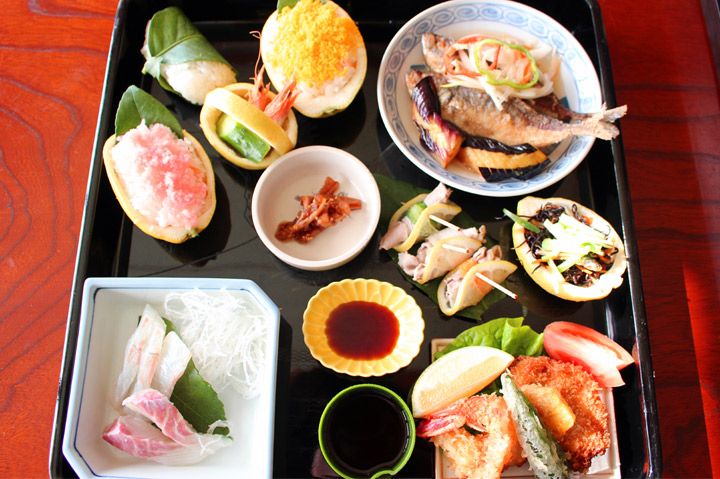 The Food Stalls of Kure Offer a Variety of Nighttime Gourmet Including Hiroshima’s Famed Okonomiyaki & A Variety of Ever-Popular Ramen Dishes!