A Town Full of Jeans?! We Took a Walk Down Jeans Street…

Well known both domestically and overseas for the quality of its merchandise and its highly skilled workforce, Kojima (Kurashiki city), the place where Japanese jeans originated, is called the sacred land of Japanese denim.

The most important characteristic of Kojima jeans is said to be their texture. Apparently many people come from all over Japan to purchase the town’s unique denim.

This time we will introduce one of Kojima’s symbolic spots, Jeans Street.

As soon as you step out of the Kojima station ticket gate a pair of jeans greets you!

If you look behind as you walk out, you can see that even the flap doors of the automated ticket gates are ‘jeans’!

And if you carry on towards the station exit, the coin lockers on your left are covered in jeans!

As you might expect in the sacred land of jeans, even the station is filled with jeans.

With my heart filled with excitement and anticipation, I reached the entrance of Jeans Street after a 15-minute walk from Kojima station.
There is a large signboard at the entrance, so you need not worry about getting lost!

I don’t know if I was astonished, but the road is paved with the image of red edged Selvedge denim. The color of the road is dyed with deep indigo that fades day-by-day, just like a pair of jeans!

Jeans Street is located in a part of Ajino shopping street that once was the most prosperous part of the Kojima area. With a total length of 400 meters, the road is lined with Kojima-born jeans brand shops, cafes, galleries and other stores offering a wide variety of goods.

The motivation behind creating Jeans Street was the opinions of jeans-lovers from all over Japan who visited Kojima, but who were disappointed by the low number of jeans shops.
To answer these many voices, the local chamber of commerce and industry renovated Ajino shopping street – it was full of closed businesses – into a street where jeans lovers could gather. The plans were launched in 2009.
As a starting point Momotaro Jeans, a local maker, renovated the old post office. Though they currently have 29 stores with participating merchants, the number of branch stores continues to increase every year.

Walking down Jeans Street, you may come across fun sights like this as well…

During the weekends the street bustles with jeans fans and tourists from all over Japan. How about a trip to Jeans Street to find the perfect pair?? Grated Yam on Rice: Made with Sticky Japanese Ya... “Meika Shitatsuzumi, ”a Japanese sweet from Yamaguchi which is soft, pleasant and melty on your tongue / San-in-do (Yamaguchi-shi, Yamaguchi) 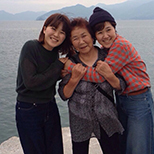 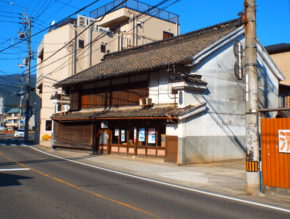 Gummy Candies That Are Just Like Udon Noodles?! How Do They Taste?! ablabo. A Project Started by the Oil Girl of Nishiawakura Village!