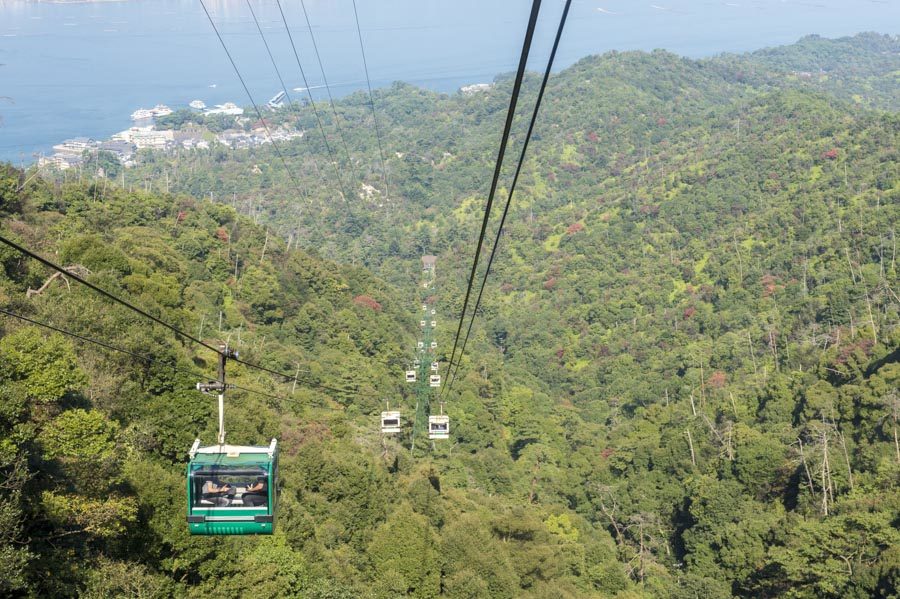 The ropeway going up Mount Misen. 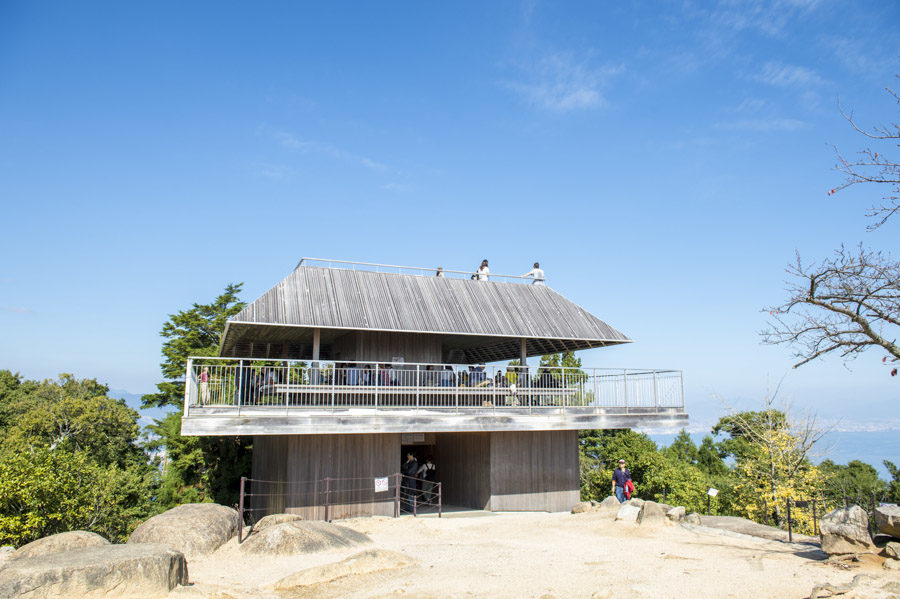 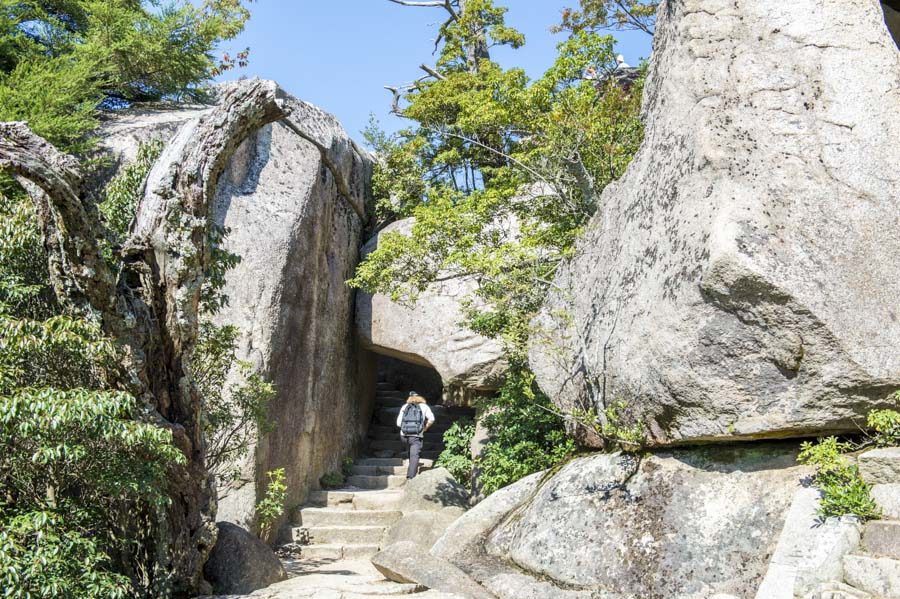 The Reikado Hall just beneath the summit created by Kobo Daishi. 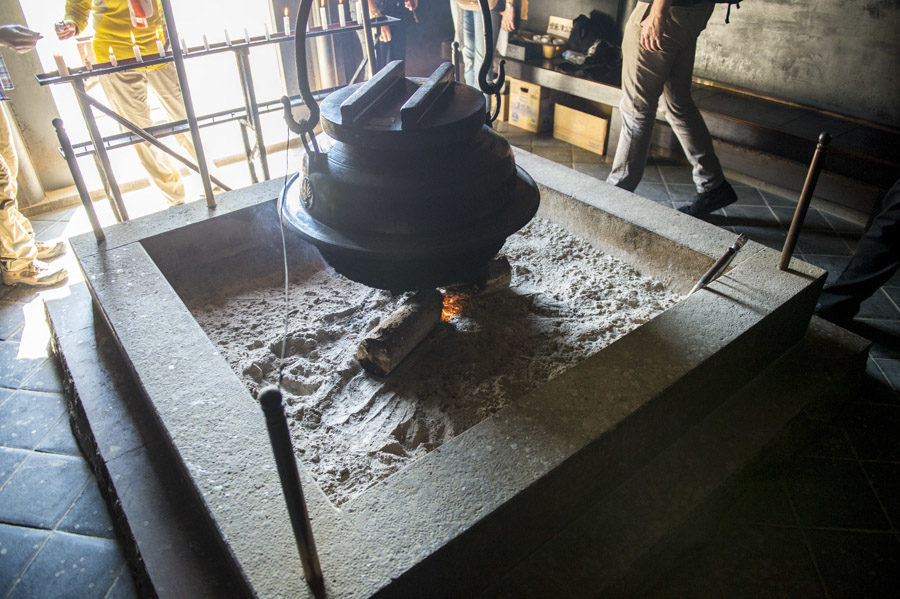 The ‘Eternal Flame’ in the Reikado Hall has been burning continuously for 1,200 years. 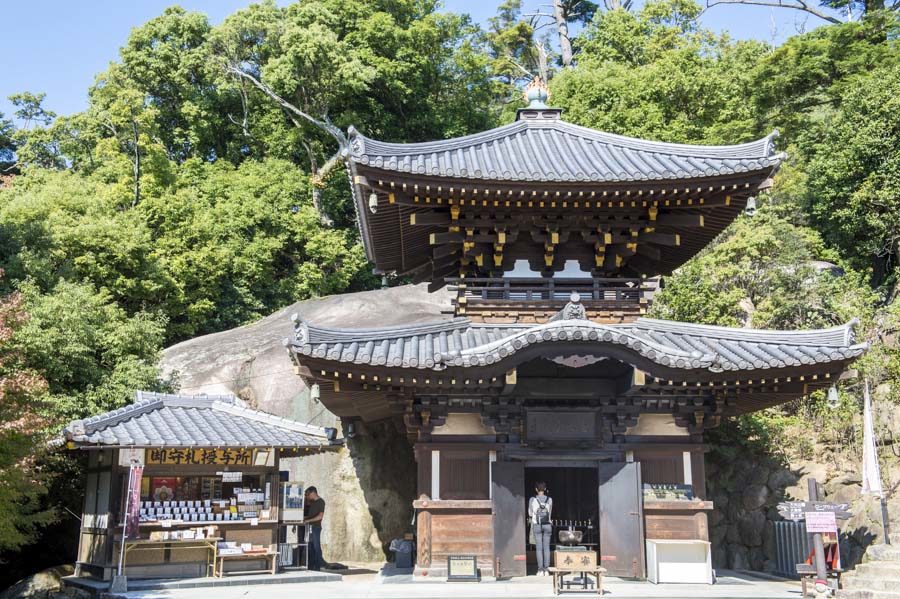 There are interesting rock formations all over Misen. The relaxing observation deck on the summit of Mt. Misen.

Strolling through Miyajima’s famous shrine, photographing the torii gate and posing with obliging deer are all musts on any trip to Hiroshima’s famous World Heritage Site. But if you’re itching for a workout and want to burn off some sushi dinners, hiking up Miyajima’s famous Mt. Misen is the perfect way to sightsee and exercise at the same time.

Of course, most visitors use the ropeway to travel up the mountain in comfort. The journey takes 20 minutes with a change halfway and the views from the gondola are stunning. Although the ropeway cuts out the majority of the hike, there’s still a 30-minute climb from the ropeway station if you want to reach the summit.

For keen hikers, there are three well-maintained routes that run from the foot of the mountain to the top: the Momijidani Route, the Daishoin Route, and the Omoto Route.

The Momijidani Route – the shortest and most popular – starts in Momijidani Park near the ropeway station and meanders up the valley beside the scenic Momijidani River. The Daishoin Route is the most strenuous of the three, and just when you think you are done over 2,000 stone steps still await you near the entrance to Daishoin Temple. Although not as challenging, the Omoto Route is the longest (roughly 3.2 km in length) and starts at Omoto Shrine.

Trekking times for all three routes range from 90 minutes to 2.5 hours, depending on how quickly you walk. A popular course among hikers is to climb the Momijidani Route and descend the steps of the Daishoin Route. If your legs are feeling the burn, you can always climb to the summit and take the ropeway down – or vice-versa.

My walk up the Momijidani Route was strenuous but highly refreshing. I was flustered and out of breath, but at the same time the clean forest air was giving my body a much needed detox. There’s something about hiking through the untouched primeval forest on Misen that leaves you feeling energized. Although, the scenic rest areas on the way up where I could recharge and take in the view were greatly appreciated.

Before the summit, you’ll arrive at the Reikado Hall and Misenhondo Hall. Both were built on the spot where legendary Buddhist monk Kobo Daishi spent a hundred days in esoteric Buddhist, training.

Inside Reikado Hall, you’ll see a black pot gently simmering over a hearth. People are free to try the water in the cauldron – thought to have the power to cure all ills. It was just the right medicine after the long hike.

The tiny fire under the pot – known as the ‘Eternal Flame’ – has been burning continuously since Kobo Daishi kindled it 1,200 years ago, and was also used to light the Flame of Peace in the Peace Memorial Park in Hiroshima City.

The summit is only a short climb from the two halls. The path weaves around towering boulders and the view opens up to give you glimpses of what’s waiting for you at the top.

The feeling of satisfaction and a sense of achievement when you finally reach the summit makes it worth the effort. Lying down on the stylish wooden observation deck with the cooling breeze is the perfect antidote to the uphill hike.

The panoramic view from the top took my breath away. The landscape conveys a real sense of the magnificence of the Seto Inland Sea. In Japanese, they have a word “tatoubi” that means “the beauty of many islands” that describes perfectly what you see at the summit of Mt. Misen.

Some advice – wear good shoes and remember to pack water. Even in the land of vending machines on every corner, you won’t find one on Misen until just below the summit. 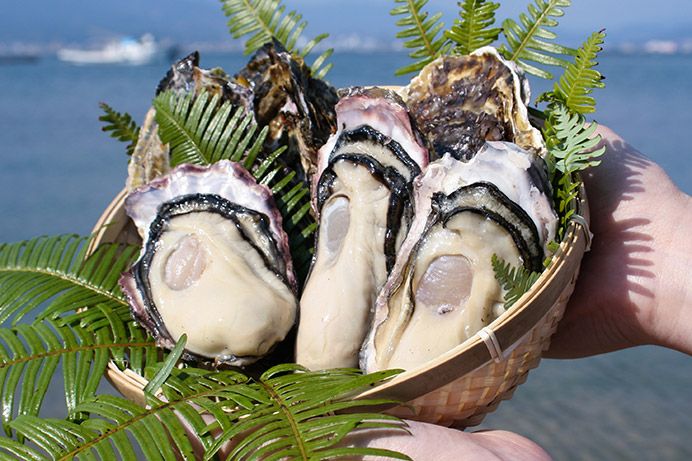 Miyajima Oyster Season is Here! The Winter Taste of Miyajima… 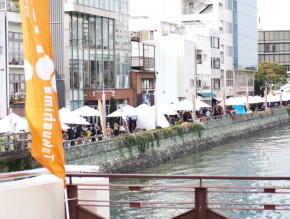 Tokushima Marché : For both Locals & Tourists! The Big Marché That Draws People from All Over!