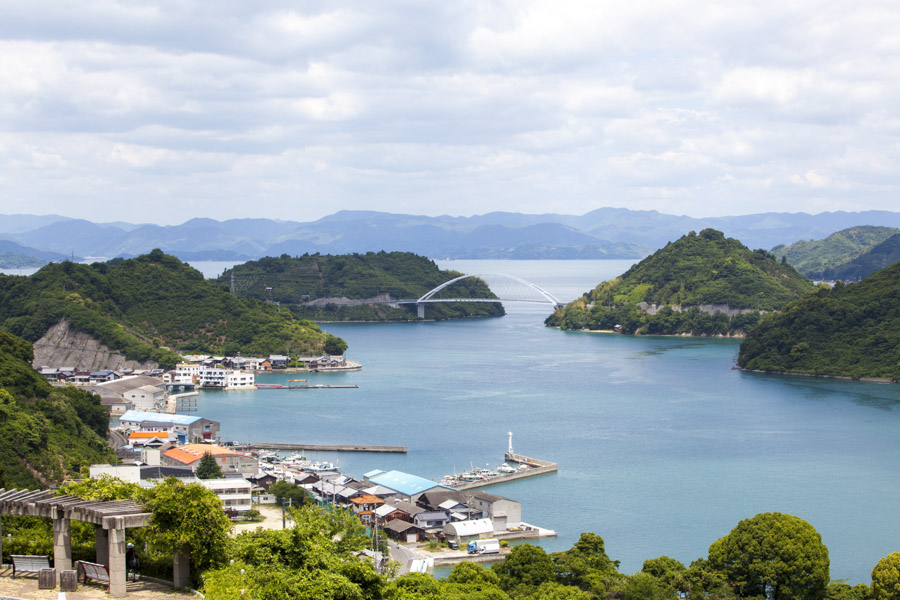 A view of Mitarai and Ocho from the Rekishi-no-mieru Oka Park.

An old picture of Mitarai harbor from the Meiji Period. 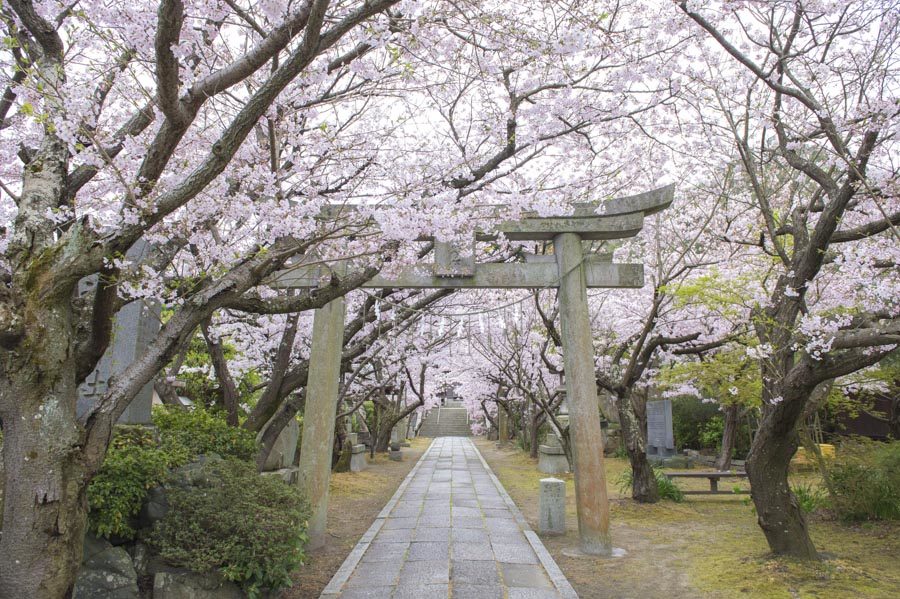 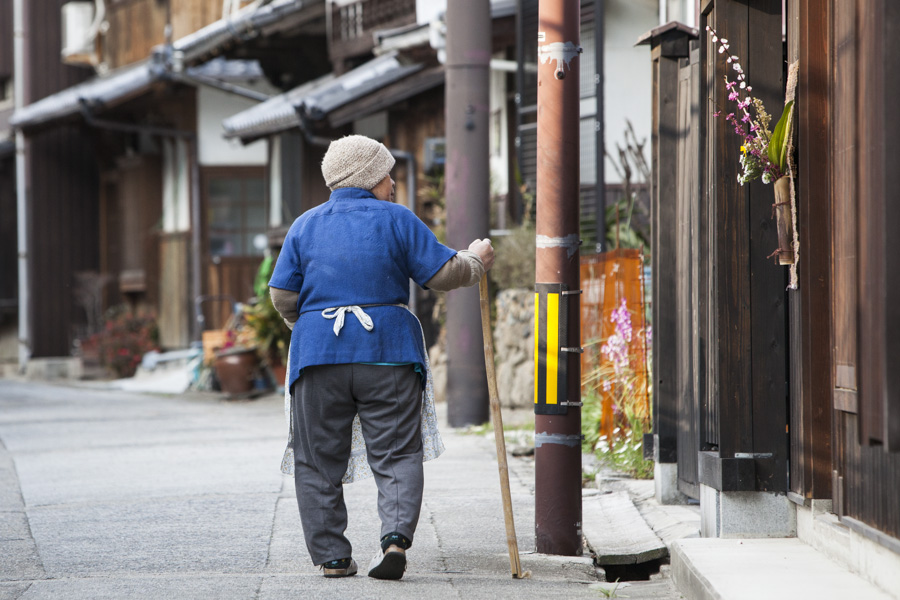 An old resident walking past one of the many floral displays hanging on the buildings of Mitarai. 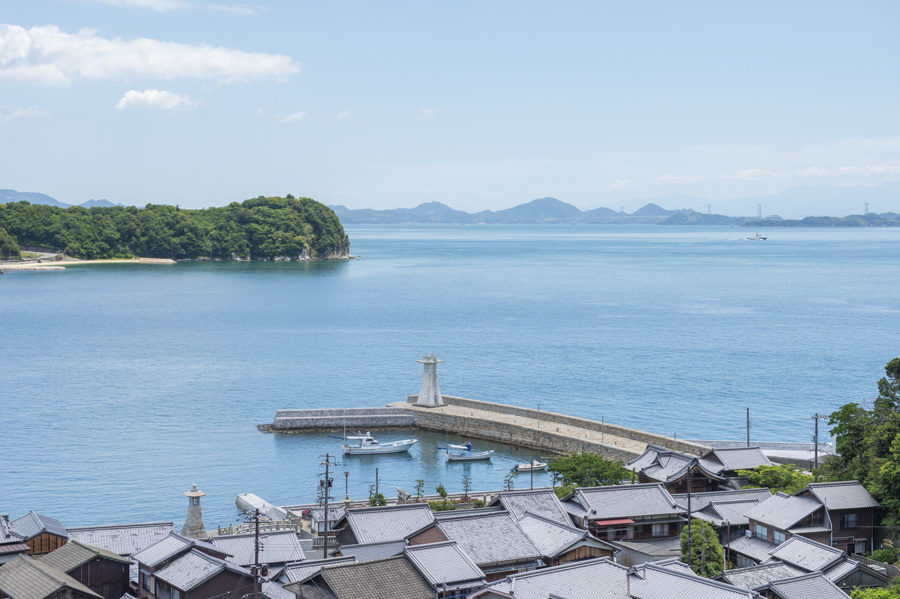 A view of Mitarai’s iconic lighthouse on the stone pier constructed during the Edo Period.

As I strolled through the streets of the small harbor town of Mitarai, it felt like time stood still. The charming streets and alleyways meander through beautifully preserved Japanese houses – some dating back over 200 years. Seasonal flower arrangements hang off the houses in bamboo vases and the townsfolk go about their day at an unhurried pace.

Situated in the middle of the Seto Inland Sea, Mitarai feels separate from the frantic pace of modern Japan. The noise of the hustle and bustle of the city is replaced by the occasional chugging of a fishing boat engine, or the sound of a white farm truck scooting past with its load of oranges and lemons.

You would be forgiven for thinking the slow life existed here for centuries. In fact, in its heyday, Mitarai was regional hub for trade, entertainment and pleasure.

The town developed with domestic sea trade routes during the Edo Period. This was a time when Japan was in ‘sakoku’ – isolated from the rest of the world for over two hundred years from 1639 to 1853. To ensure Japanese boats stayed inside domestic waters, the ruling Tokugawa shogunate in Edo (now Tokyo) forced merchants to build their trade vessels in a weakened state so they couldn’t survive open water.

This meant shipping hugged the coastline, riding the tides and the winds up and down the length and breadth of Japan. With its natural protected harbor and conveniently located on the sea route to and from Osaka, Mitarai became a favorable place to drop anchor.

The town thrived under these conditions. They re-stocked ships with water and provisions, while the town provided the wealthy captains and seafarers with everything from theaters, sento bathhouses, to even a pleasure quarter.

You can still see reminders of those prosperous times in present-day Mitarai. The geisha house where 99 geisha lived and entertained still stands. You can visit the rooms in the back where VIP guests would be escorted in through a secret entrance.

The Shinko Clock Shop – one of the oldest clock shops in Japan – is still in business on the main road in Mitarai. The current shop is unchanged since it was built in 1919. Its 4th generation custodian and master watchmaker Keiichi Matsuura is famous throughout Japan for his skill at repairing antique timepieces. When they began selling clocks in 1858, only the very wealthiest could afford such luxuries and it was rare to see shops operating outside the big cities. The presence of a watch shop in Mitarai further indicates the wealth and money that poured through this tiny harbor town.

Valuable information also flowed through Mitarai. The flames of the famous Meiji Restoration – a revolution that overthrew the Tokugawa Shogunate in 1868 – were kindled in secret meetings in teahouses like the ones in Mitarai and other neighboring harbor towns. You can see the regional headquarters of the different clans that were instrumental in the revolt – like the Satsuma Clan who owned the biggest headquarters in Mitarai.

If you’re feeling peckish, the local ‘shokudo’ canteen at Miharashi Ryokan is a treat. Their menu has been whittled down to a handful of local favorites. The most popular dish is ramen noodles served in a delicious soy sauce soup. For people who want more, the day’s side dishes are inside a glass cabinet. Just take out what you want and ask them to heat it up. When you have had your fill, the owner counts your plates and tots up the bill using his traditional wooden abacus.

One of the delights of staying overnight in Mitarai is the night view across the water towards Shikoku. As you sit and watch the moonlight glitter on the water, you can almost hear the fun and gaiety of the past reaching out from the silence. On weekends, the illuminated bridges of the Shimanami Kaido glisten in the night. There is plenty of accommodation in Mitarai, including the newly opened Kusushi – a Taisho Era hospital converted into a fashionable guesthouse and bar.

Mitarai sits on the eastern outcrop of Osaki Shimojima Island. The island is part of the Tobishima island chain – a set of five islands connected by a series of scenic bridges to the mainland making it accessible by car or bus. Its road-links and ferries to the Shimanami Kaido in the east make the Tobishima Islands and Mitarai an ideal destination for cycling enthusiasts.

The Rekishi-no-Mieru-Oka Park is a a short invigorating walk up or drive from the town. The park offers one of the best views around. On a fine day you can see the both the peaks of Shikoku and the distant peaks of northern Hiroshima.

There are also high-speed ferry links that connect the island to Takehara on the mainland. From the next island of Okamura, you can take ferries to Imabari City on Shikoku.

This charming Edo period town is certainly worth a visit, even as a quick detour from Hiroshima’s other well-known sights. 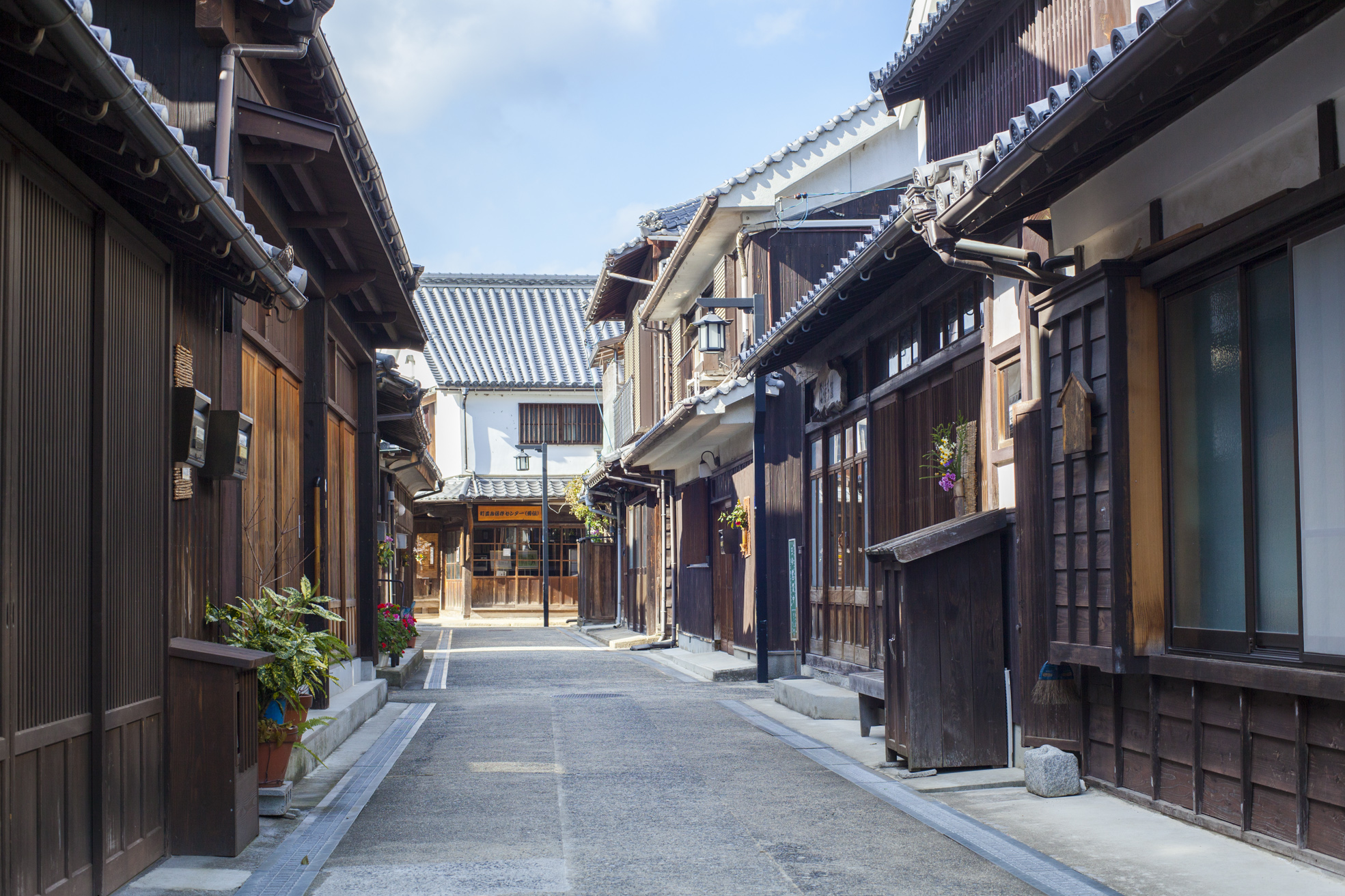 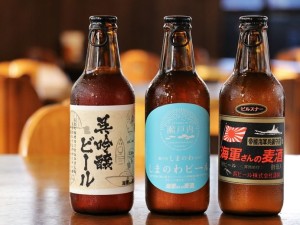 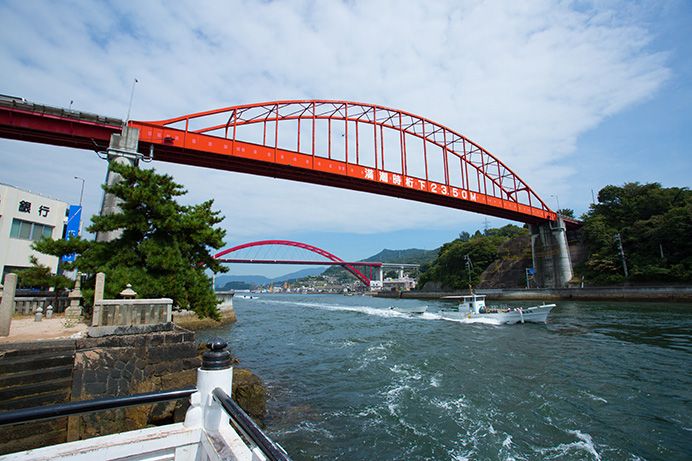 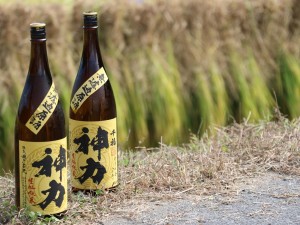 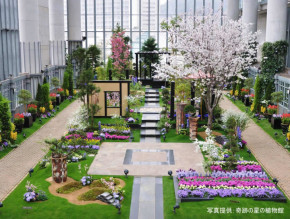 The must-have item is your camera! The western drive route includes photogenic spots in Kagawa, Kochi, Ehime, and Hiroshima 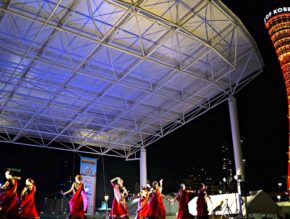 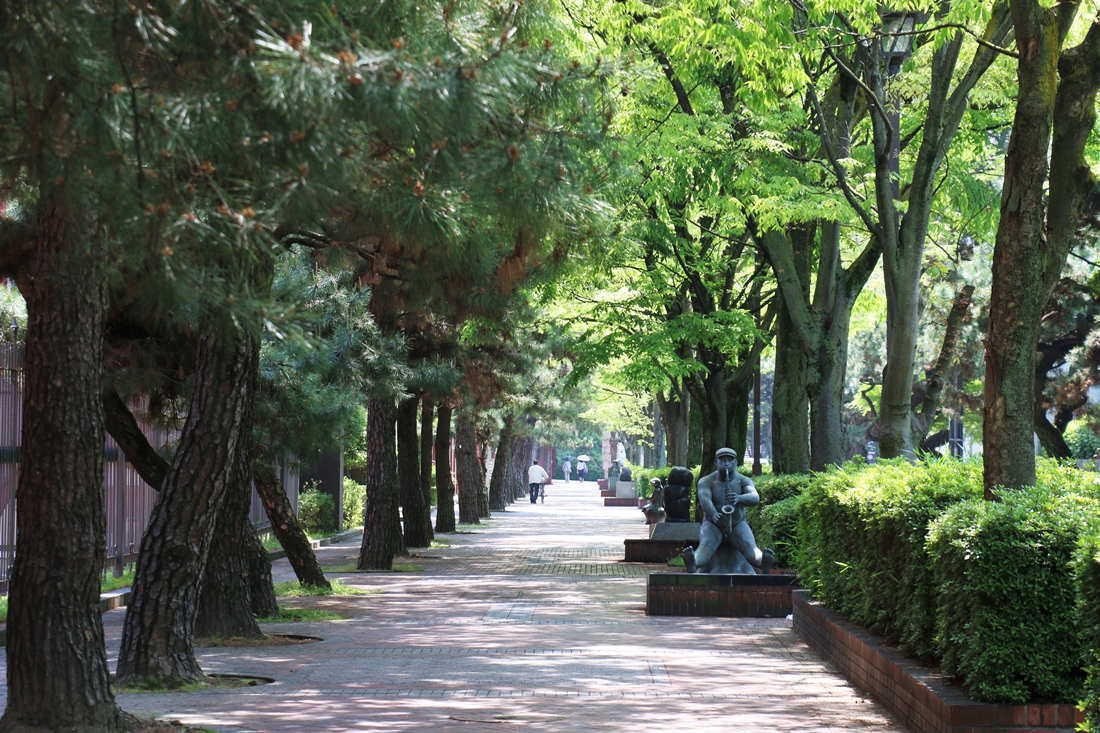 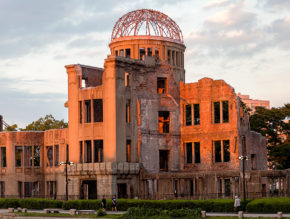 Hope Amidst the Ruins – a Visit to Hiroshima Peace Memorial Park

The must-have item is your camera! The western drive route includes photogenic spots in Kagawa, Kochi, Ehime, and Hiroshima 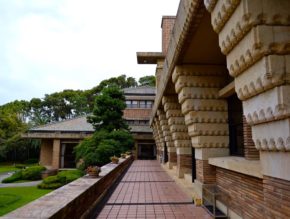 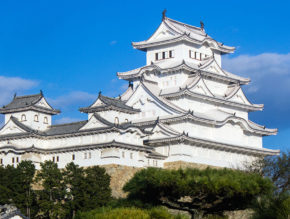