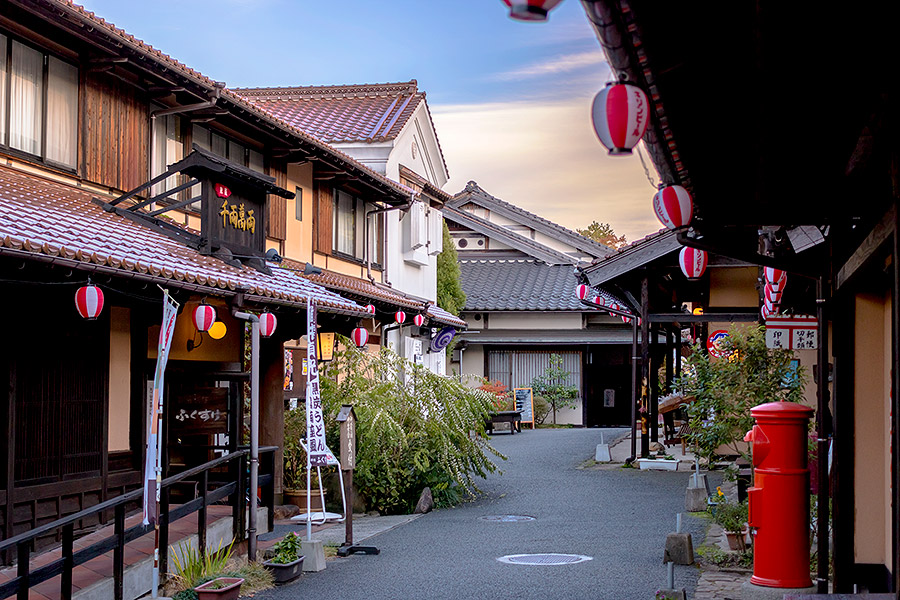 The late 1950’s style which pervades Kagura Monzen Tojimura perfectly captures the era which witnessed the creation and rise of modern kagura. 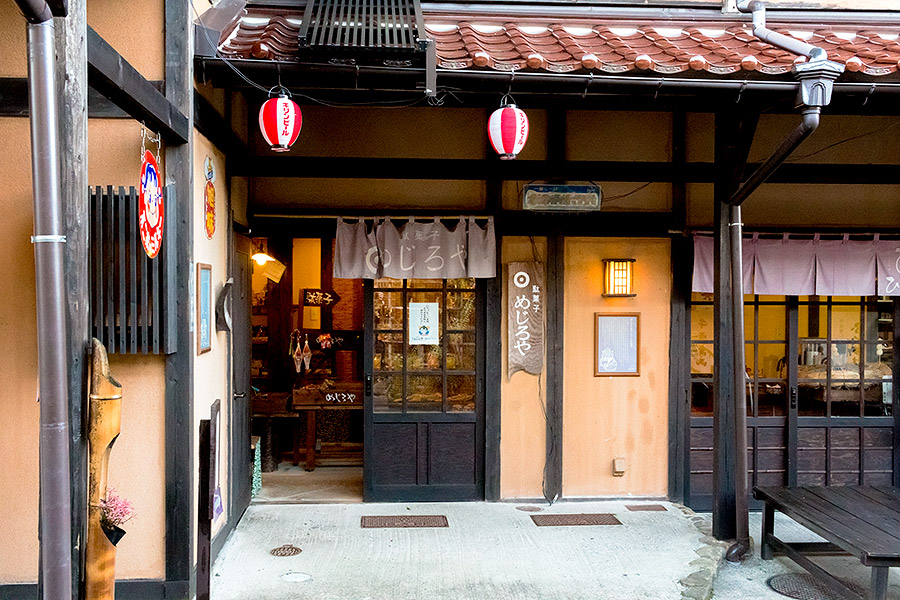 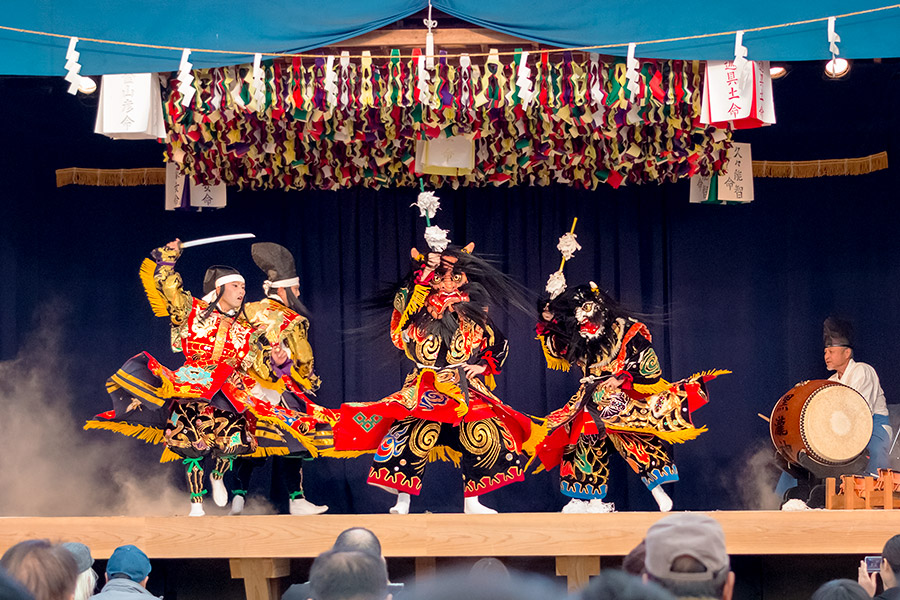 The dynamic dance of samurai and demons will dazzle your eyes. 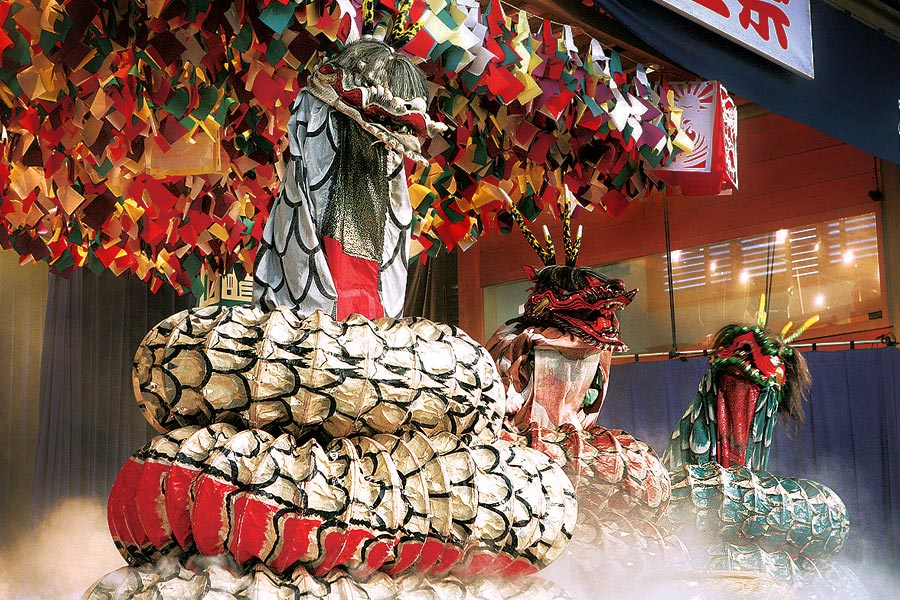 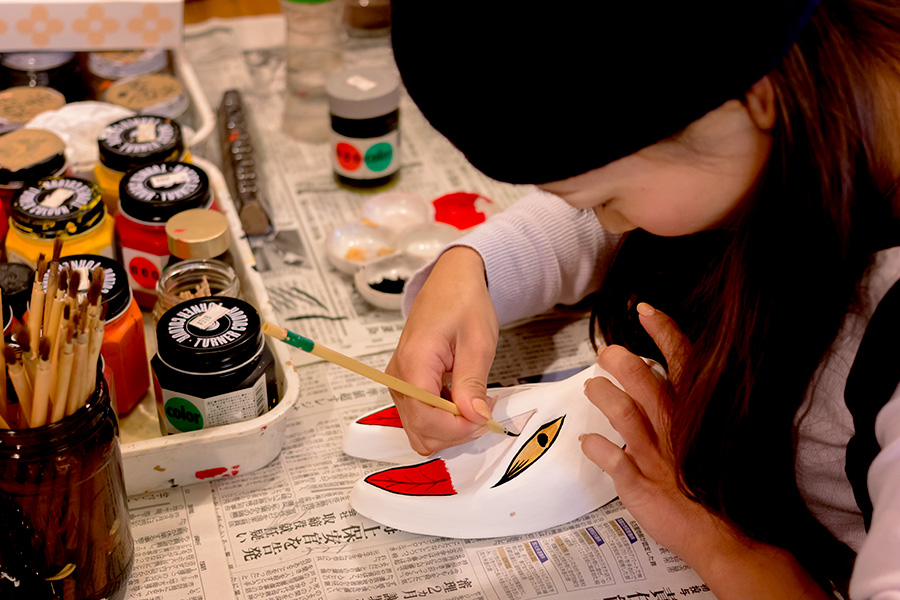 Kagura Monzen Tojimura’s community space features a kid’s space and workshops in which you can make your own kagura mask. 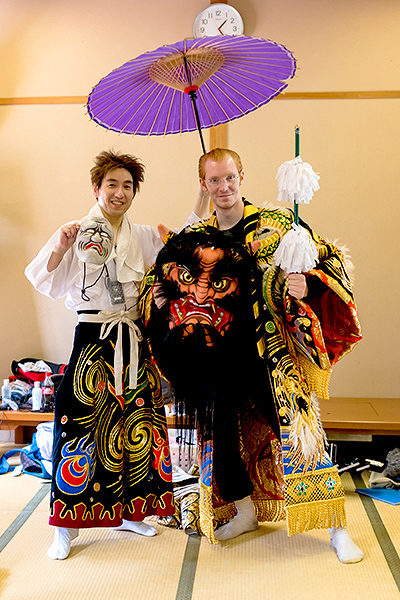 On weekends you can go backstage and try on the kagura costumes (which weigh around 20 kg)! 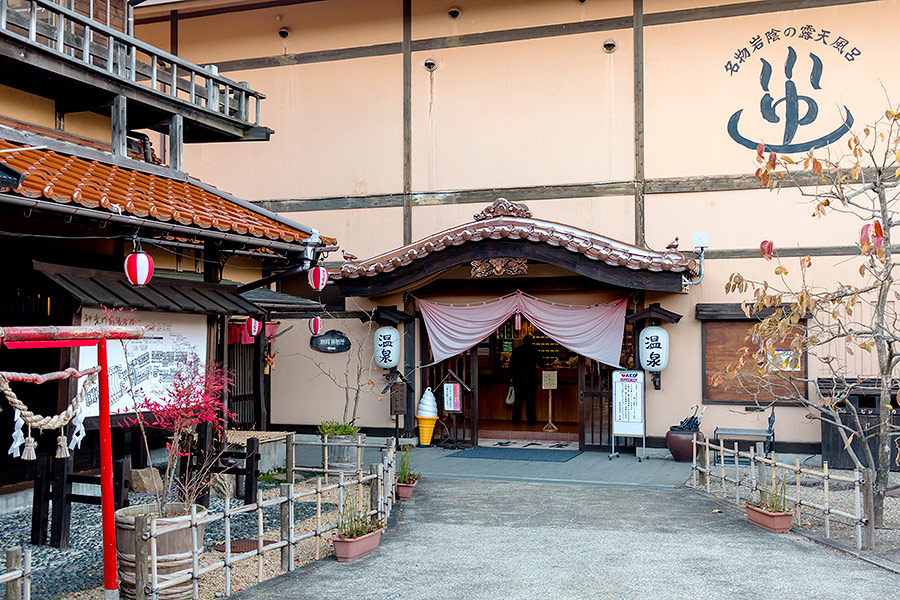 A dip in the traditional onsen makes for perfect relaxation between performances.

“Won’t you come in and share a cup of sake with us?” they ask, kneeling reverentially to the splendid warriors before them.

“It would be our honor,” replies the leader.

The old women at once produce jugs of rice wine to entertain their guests, and dance from one samurai to the next as they fill and refill their cups.

Soon the brave samurai grow weary — too weary, it would seem, and far too soon — and as they lull into slumber, a white mist fills the air.

In a flash, the dancing women transform into demons, their hideous faces glowering in the mist above our helpless heroes as the wood flute unleashes a desperate flourish, and the drums and cymbals thrash a wild frenzy.

Such are the spectacles of kagura, a millennia-old form of storytelling, incorporating music and dance, and originally performed at Shinto shrines as entertainment not for shrine-goers, but for the very gods themselves.

Yet in modern times, the samurai, dragons, and demons of kagura have spilled out of the Shrines, and now battle each other across secular stages too, not the least spectacular of which is Kagura Monzen Tojimura, a resort village in Hiroshima Prefecture delivering live kagura performances year round.

Built in 1998 as a 1955-60’s era retro village, Kagura Monzen Tojimura recalls the golden age of Japan’s post-war recovery. At that time, the economy had at last stabilized, the rubble of firebombed (and A-bombed) cities had given way to modern metropolises, and people’s lives began returning to normal. For many, this remains a deeply nostalgic time in Japanese history.

But you’ve gotta wonder, “What does the post-war recovery have to do with a thousand year old sacred dance?”

As it turns out, quite a lot.

While kagura has undergone numerous transformations over its lengthy history, one of the most significant occurred when U.S. Occupying Forces, following Japan’s defeat in WWII, banned kagura altogether. After all, kagura told traditional Shinto stories as a form of reverence for the gods, and by association, the living descendants of the gods — i.e. the emperor.

Needless to say, the Occupying Forces were having none of that.

So in 1947, Junzo Sasaki, principle of Hokusei Junior High School in Akitakata, Hiroshima Prefecture, created shinmai (literally “new dance”) kagura. In fact, the original documents submitted by Sasaki to prove that his new kagura was “just theater” (i.e. not sacred) are on display in Kagura Monzen Tojimura’s museum gallery.

So what changed in this “new style” of kagura?

“Honestly, not much,” admits Masakazu Masuda, Executive Director at Kagura Monzen Tojimura. “Sasaki increased the tempo (probably more to obscure the sacred movements of the dance than anything else), arranged the movements in a slightly more dramatized way, and focused on folk tales instead of Shinto legends — but beyond that, Sasaki’s ‘new kagura’ was essentially unchanged.”

From then on, kagura was able to continue as a “theatrical” performance, though notably many of the “folk tales” and “historical legends” Sasaki and others chose as subject matter for their new, secularized kagura were little more than repackaged Shinto legends “with names changed to protect the omnipotent.”

Yet when asked if shinmai kagura is entertainment for the gods or a theatrical performance for us mere mortals, Masuda hesitates.

“It’s difficult to say… Nowadays, perhaps it’s becoming more of a genuinely theatrical performance. However, these two qualities are by no means mutually exclusive — and never were.”

As a result of this historical link, Kagura Monzen Tojimura offers only shinmai kagura, which focuses on fast paced action, split-second mask changes, and occasionally even pyrotechnics.

“Our goal from the beginning was to spread and promote this style of kagura. But when we started 20 years ago, kagura wasn’t super popular. It was only performed at harvest festivals for local people. We were afraid kagura alone wouldn’t be enough of a draw, so we decided to spice things up by creating this vintage village.”

Ironically, Kagura Monzen Tojimura’s biggest challenge today is quite the opposite.

“While the issue 20 years ago was that kagura wasn’t popular enough, now the trouble is that it may actually be too popular. People don’t need to travel to a special retro resort village to see kagura — all over western Honshu, they can see performances happening in their own towns.”

Yet from what I could see, Kagura Monzen Tojimura had far more than enough on tap to keep the customers coming in.

Furthermore, retro-styled ryokan, or traditional inns, await to receive overnight customers for around 10,000 yen a night (roughly $100 USD), with dinner and breakfast included.

Best of all, Kagura Monzen Tojimura boasts two kagura stages, one indoors in the style of a sumo hall, and the other outdoors beneath an enormous festival tent. The latter, dubbed “Kagura Dome,” operates as a traditional Shinto-style performance space, exactly as you might find during a festival — and as such offers one of the most authentic and lively kagura viewing experiences available in Japan.

In fact, the performances onstage at Kagura Monzen Tojimura are absolutely stunning. Yet amazingly, there’s no such thing as a “professional kagura troupe,” even at this well known establishment. Modern kagura performers, without exception, hold down day jobs, and meet up with their troupes to practice each week between working hours. It’s a labor of love, and as a result, Kagura Monzen Tojimura only hosts live kagura performances on Friday evenings, Saturdays, and Sundays — i.e. when the performers don’t have work.

Kagura Monzen Tojimura does offer recorded screenings on weekdays, but it’s the live performances that will take your breath away.

In the Kagura Dome, audience members can eat food and drink beer or sake purchased from food booths directly on site — and, apparently, can even interact with performers during the show (I personally witnessed an old man in the audience attempt to revive a battered hero, exhausted after an intense battle with a demon, by reaching onto the stage and handing him a beer).

“You have to see kagura while sitting on a tatami mat, eating, drinking, and laughing with friends and family,” says Masuda, “That’s true kagura.” 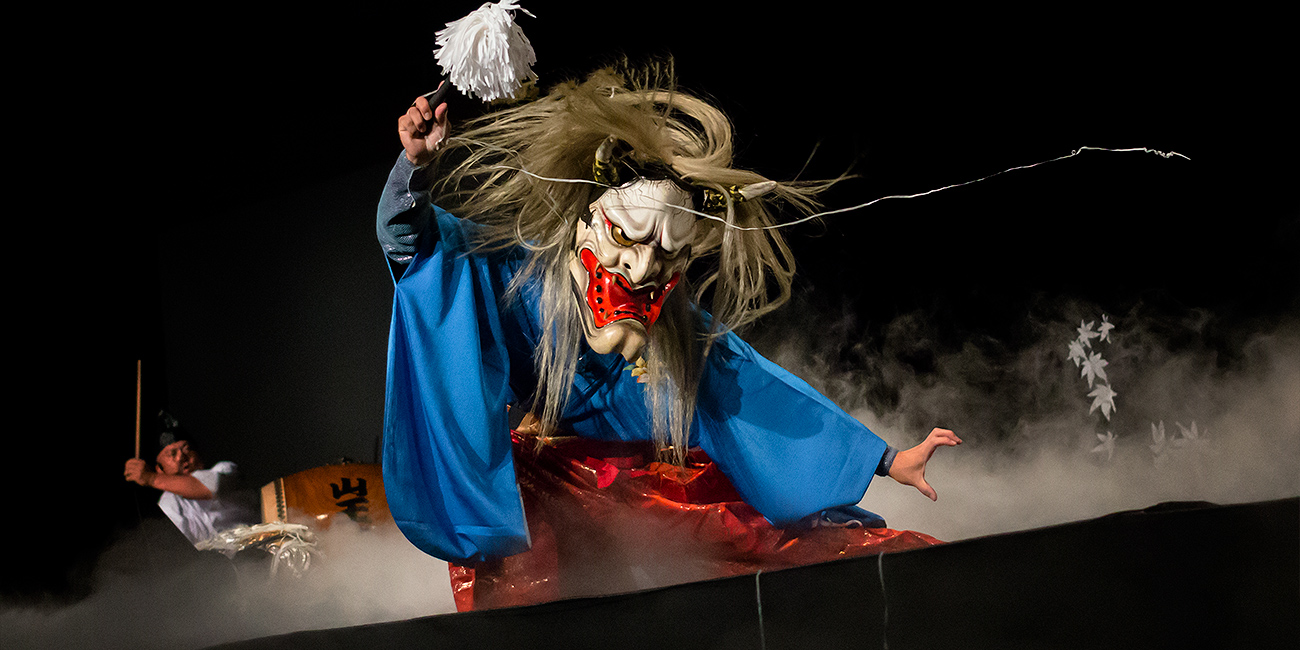 Extra Information
Kagura Monzen Tojimura
Address: 4627, Hongo, Midori-cho, Akitakata-shi, Hiroshima
Phone: +81-826-54-0888
Kagura Monzen Tojimura offers free parking on site, and can pickup visitors free of charge from the nearby Midori Station (one hour by bus from Hiroshima City) so long as they receive notice by phone (Japanese) or email (English or Japanese) in advance.
http://www.kaguramonzentoujimura.com/main.html 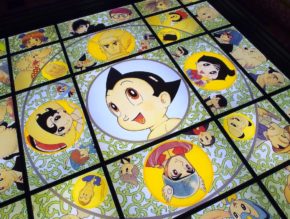 This is the ultimate soothing trip – feel the sense and the heart of Japan in Uchiko Town and Ozu City in Ehime. 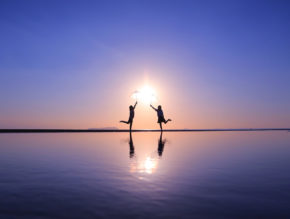 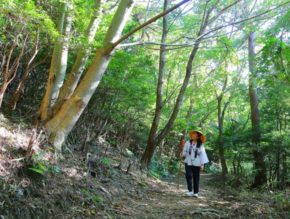 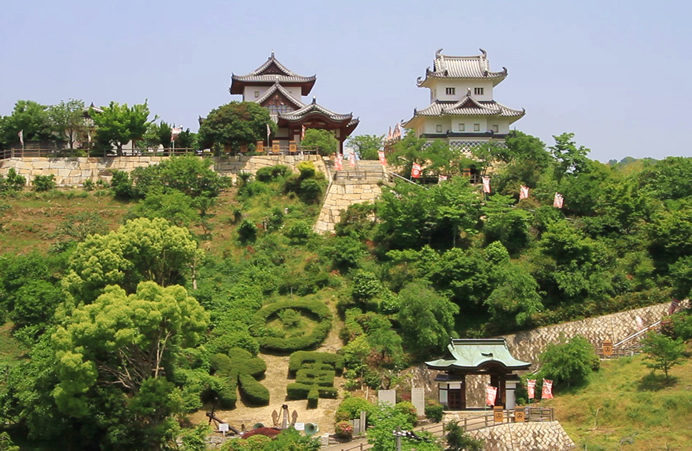 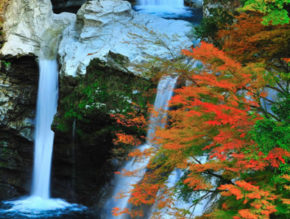 The Search for Autumn Colors in Tokushima 2016!