On a certain Wednesday evening we visited the Hiroshima Prefectural Citizen’s Culture Center, located near the Hiroshima Peace Memorial. The aim of that visit was…

Ohh scary! Greeting us at the entrance of the culture center were members of the Imuro kagura troupe who were performing that day. Kagura is, simply put, a dance to express gratitude for the blessings of nature and to pray to the gods. It’s an art form that exists in rural communities throughout Japan, but in Hiroshima there are 300 kagura troupes, which makes it a very active kagura region even on the national level.

On the pamphlets distributed on the day of the performance you can read summaries of each program. If you read it through, it makes the performance even more fun! (English versions are also available.)

The seats are full before the start of the 19 o’clock performance. Even though it’s a weekday, there are so many people!

Finally the performance starts. The first act, Dainankou, is followed by the second act, which depicts the famous legend, Yamata-no-orochi (‘orochi’ = ‘large serpent’).

Waaah!!! Locked tightly together, the serpents go on a rampage. Each one is 17 meters long!

Matched with the sound of flutes and taiko drums, they even jump among the audience! In recent years, in order to increase the level of entertainment, more direction has been added both to the acoustic and visual elements. Outside Japan, the art form has apparently even been called “Rural Opera”.

He’s here! Susanoo-no-mikoto, the hero! The intense battle with the serpents ends in…

a splendid victory! And thus peace is again brought to the world.

The dynamic performance of the “Yamata-no-orochi” has made it a popular act. In comparison, Dainankou, the first act, is a moving story depicting the relationship between siblings and their parents. From the story and the dance to the costumes, the highlights change according to each performance – you won’t grow tired of it, no matter how many times you visit.

After the exciting performance has finished, it’s time for a commemorative photograph. You can try on the lavish costumes, or even take a picture with the serpent♪

The kagura stage colors the nights in Hiroshima. Do add it as one attraction of your Hiroshima travel plans! 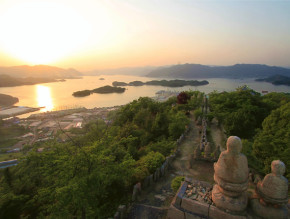